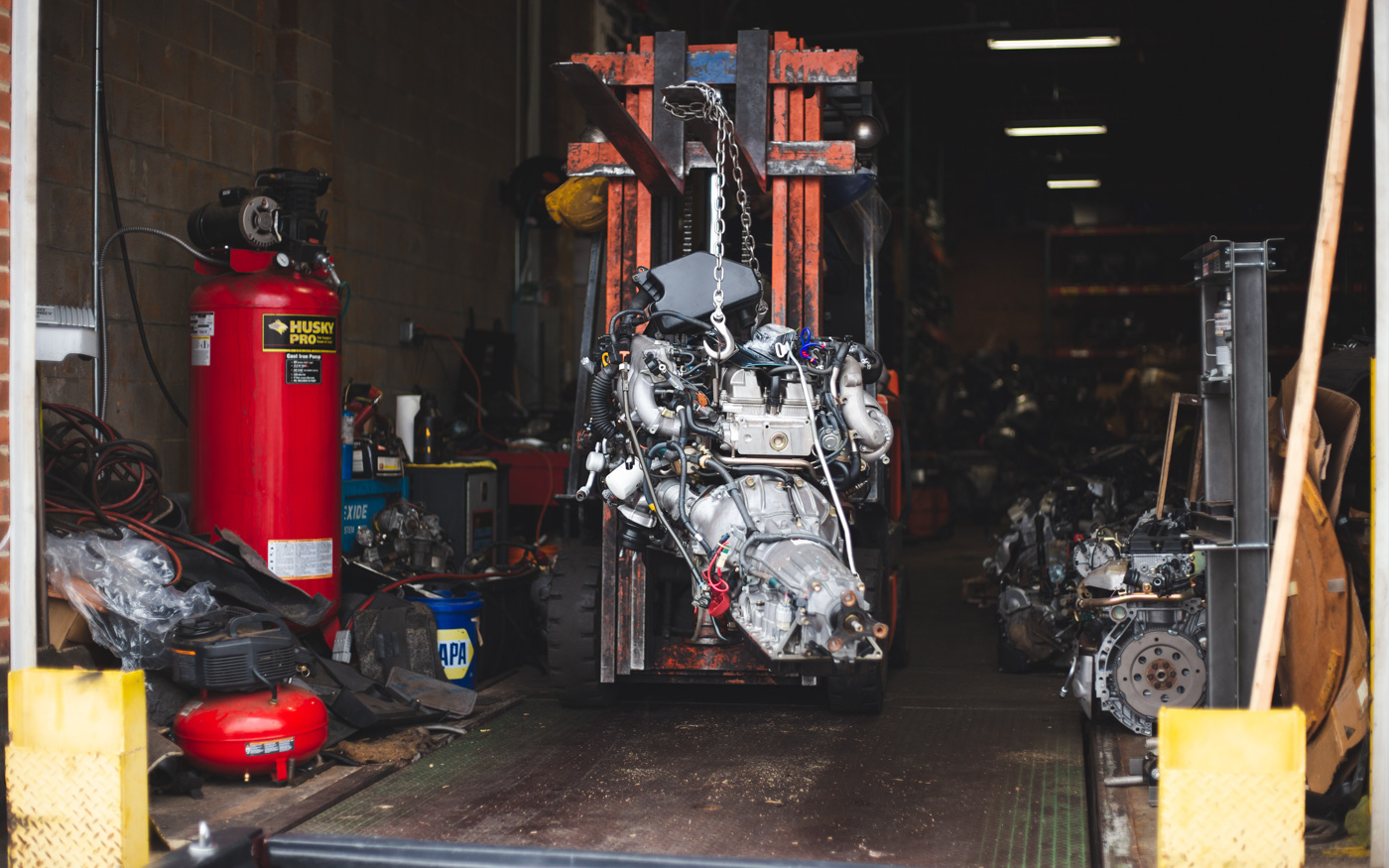 My long time friend and essentially brother David (@ddinnie) has been dreaming of swapping a 2JZ-GTE into his IS300 for years now. While it was always in the works, a generous Christmas gift from his wife sent the swap plan on a fast track. His years of researching in advance meant that he was ready to go ahead and pick up the engine. This engine would be replacing the current 2JZ-GE powerplant with a variant of it that came from the factory with twin turbos, which of course means more power.

Thus, we found ourselves in heaven on earth, also known as J-Spec Auto Sports. Engines, front clips, wheels, coilovers, and body panels litter the ground and shelves in the tightly packed warehouse.

David knew exactly the engine he wished to acquire, and was quick to strike up a deal. I’ve spent some time in the warehouse before (see: my 404 page), so I didn’t explore that much this time, hence the lack of pictures. However, since the aforementioned packed warehouse was…packed, they had to dig out the engine so that we could load it up and leave. This gave us some free time to visit their other facility just down the street and check out their collection of freshly imported RHD vehicles from Japan.

One of my favorite cars in the stash was actually this AW11 Toyota MR2. This isn’t a body that Americans had to wait 25 years to even lay an eye upon, but this RHD example had beautiful dark blue pearl (8E3) paint and was equipped with a five speed manual transmission to deliver the power sourced from the 4AGZE supercharged engine. The Volk TE37s it sits on compliment the sharp, undeniably 80’s bodywork.

There were many other gems in storage - many I didn’t get a chance to capture, or couldn’t get a good angle on.

A Suzuki Cappuccino inside contained this weird OILOOKS-I device that I had never seen before. Some internet sleuthing reveals this little yet bulky tool helps keep track of when to perform oil changes. It seems like a gimmick to me, but it’s neat to see J-Spec include little leftovers from Japan in the sale.

Some time passed, and we headed back to the main facility to pick up the engine. Paul from J-Spec kindly gave us a ride back in his hawkeye WRX, which was a treat to listen to.

When we arrived, Alam was quick to help us load it into the back of David’s truck. He was happy - not just for the sake of the sale, but because that little bit more of the warehouse’s space was reclaimed.

We headed back to David’s house with the engine in tow. Upon arrival, we schemed what to put where in his little tool shed, and got moving. First, we freed up his engine stand by putting his old 2JZ-GE block on a tire so that it may one day be repurposed to make a 1.5JZ by mating it with the head from a 1JZ. Following that, we removed the automatic transmission that came attached to his new to him 2JZ-GTE. While the automatic is more or less worth nothing, David was eager to acquire the bell housing from it, which will get repurposed when married to a CD009 transmission that he required last year. This 6-speed transmission was sourced from a Nissan 350Z and will be made compatible with the 2JZ-GTE engine thanks to an adapter.

Snow began to fall as we finished up and packed everything away. This little writeup falls several chapters into David’s IS300 build, but ignoring any unexpected circumstances, there will be several more chapters to come.